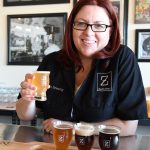 Lori has been Geoff’s co-conspirator for more than 20 years, and yes, she was the one responsible for that first home-brewing kit. She was the original taste tester and guinea pig as he honed his brewing skills.

A proud member of the Pink Boots Society®, which supports women professionals in the beer industry, Lori is an active collaborator in every aspect of Bado Brewing – as business partner, legal advisor, assistant brewer and (still) taste tester.

Lori likes to claim that she is the “occasional voice of reason” in the collaboration with Bado to bring Zed’s Beer to Marlton, NJ.  She’s also an intellectual property lawyer, a recovering music promoter, and (most importantly) a mom and a wife.

While she won’t pick a favorite, Lori says she can’t pass up any beer or cider with an exotic spice, rare malt, or unusual fruit as featured ingredient.