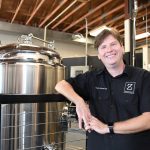 Who knew that receiving a Mr. BeerÆ kit as a gag Christmas gift could change your life? That was the case for Geoff Bado, who now, 20-some years later, is the proud founder and brewer for Zed’s Beer/Bado Brewing, LLC in Marlton, NJ.

In 2022, Zed’s Beer was declared “NJ Session Brewery of the Year” and in 2020 “NJ Brewery of the Year” by the NY International Beer Competition.  Zed’s Beer took 9 medals over those two championships.  In 2019, Bado was honored to win 5 medals for the beer brewed at Zed’s Beer, including a Gold Medal for Zed’s in Ireland–Dry Stout at the 2019 US Open Beer Championships.  In fact, Bado has won 3 gold medals for his Dry Stout and every single “core four” beers have medaled in International competitions.

An award-winning homebrewer, Bado is one of an estimated 6,500 Certified Judges by the Beer Judge Certification Program (BJCP). He judges entries at homebrew competitions and at HomeBrewCon and would gladly judge the beer you’ve just brewed in your garage.

Bado is a member of the Barley Legal homebrew club and has designed more than 30 recipes in the last 20 years – many of them inspired by family roots and regional styles.

He has taken his passion for beer, family and community and channeled it into creating every aspect of Zed’s Beer– from the recipes and process to the design and structure of his first brewery. He’s even built the bar and bench in the tasting room himself.

Bado’s brewing/business philosophy is focused on creating high-quality, craft beer that is flavorful and complex, yet approachable.  Zed’s Beer will focus on beers that are 5.5% Alcohol by Volume (ABV) and lower.

Prior to starting Zed’s beer, Bado was in Marketing and Advertising at Campbell Soup Company and Subaru of America.

Bado’s favorite beer is whatever beer is in his hand. Visit Zed’s in Marlton, New Jersey to taste for yourself.