A bit ago I shared some info I received while attending the Craft Brewers Conference regarding trends in beer flavors.  I had a few people ask for a bit more information.  So while I can’t present the whole Sentsient Flavors presentation, I will expand on an interesting trend they noted that has been getting a lot of publicity lately.  Specifically how it might lend itself to craft beer. 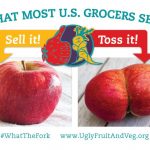 Ugly tastes fine.  I’m not sure it’s widely known, but because people taste first with their eyes, then their nose and finally their mouth, it’s standard practice to have “ugly” food rejected by the growers.  And if the Ugly Food makes its way to the retailer, the grocery store frequently rejects it from their shelves.  For this discussion, Ugly Food are veggies and fruits that look different than what is normally presented in the grocery store.  The food can be misshapen, unbalanced, off color or not the exact right color.  Basically, Ugly Food is anything that the grower or grocer thinks the consumer won’t eat because it’s different.

Most times, Ugly Food is just as tasty as Beautiful Food and frequently Ugly Food actually tastes better.  Those who love Ugly Food believe that it’s allowed to ripen longer and can therefore be sweeter than Beautiful Food.  There are grocery stores in Europe that are featuring Ugly Food and even advertising it.

So what could this mean to a craft beer brewer?

A craft beer brewer could mimic the idea of Ugly Foods thru the names of their beers.  Instead of selling “Grapefruit IPA,” the craft beer brewer could market “Overripe Grapefruit IPA” or “Bruised Apple Ale” or “Stayed on the Vine Too Long Blueberry Wheat.”  Maybe “Wrong Color Banana Hefeweizen” or “Left Out Uncovered So That It Has That Powderey Stuff On IT Chocolate Stout” would sell.

The tap handle and labels could reflect the name, showing misshapen and irregular ingredients.

Assuming that the perception of those who believe that Ugly Food tastes better, the flavors and mouthfeel could mimic that intensity.  The sweetness of an “OverRipe Melon APA” could be cloyingly sweet.  The Bruised Apple Ale could be hyper-carbonated to over a 5.  it might be difficult to pour and scary to bottle, but the intensity of its ugliness could show through.

There’s probably a bit of education needed before presenting these beers to a consumer, but who knows?

thanks to uglyfruitandveg.org for the pix