The great fall tradition of Evesham Harvest Fest where thousands of Evesham Township residents gather on Main Street to work the harvest continues!  I’ve seen the fields and there is a bumper crop of cranberries, peaches, blueberries and pineapples along Main Street—and this bounty won’t pick itself, people!  Get out there starting at 10am.  Zed’s will be opening early at 11 for many of your refreshment needs.  We don’t have a tent and won’t be pouring, but keep a look out for us in the crowd with a special discount for you to use after you’ve worked the field.

This Friday will be the last time I’ll open Friday at noon.  Come on in on your lunch break to embrace the dying embers of summer—with a beer!

As some of you are aware, the director of the ABC, David P. Rible, has used his authority to place additional restrictions on Limited Breweries in NJ.  You can read the special ruling for yourself here.  In our opinion, these rulings seem to be specifically targeted toward downtown breweries like Zed’s Beer where the community gathers.  It also seems to show that the Director does not completely understand that companies within the same industry can have different goals, business models and timelines for growth.  Finally, its clear that the director does not value the new jobs created by these breweries nor the ancillary benefits to the community.  Lori and I are more than happy to talk to anyone about these rulings and the changes we’re being forced to make.  Over the coming weeks and months you’ll have the opportunity to read our take on the Director’s special ruling, both positive and negative.  And hopefully we will hear from you regarding how you feel, positive and negative.

In the meantime, after reading the special ruling please feel free to contact the ABC at 609-984-2830 and let Director Rible know if you agree or disagree with him.  Keep in mind that his is an appointed position, so he does not necessarily have to take your call or respond in the same way a freeholder, senator or other publicly elected official does.  Depending on how you feel, You may also sign an online petition at https://brewedindependent.org indicating that you’re as worried about the growth of downtown breweries as we are.

Finally, the special ruling continues to evolve to address the typos and contradictions found in the document.  (For example, the document permits background music, radio and television, but prohibits any television programs, movies or sporting events pre-recorded or otherwise.)

Bear with us as we may also seem to contradict ourselves as we get clarification on the document. 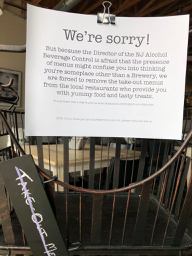 Zed’s on the West Coast—IPA v6

Zed’s in the Backyard—Copper Cream (No Crowlers)