The shaker pint should be destroyed. The damn things are built to last a lifetime, however, so that’s probably not going to happen. But it should. 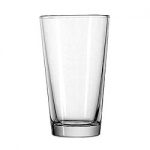 Be forewarned that this might sound a little like a commercial for proper glassware. And to some extent, it is, but it’s also something that I’ve experienced at a session sponsored by Spiegalau at the Craft Brewers Conference. I will evangelize.

Those straight sided thick glasses you see everywhere are called “shaker” glasses. They’re designed to be multi-use, all purpose glasses that can be produced at low cost. They stack inside one another, are incredibly thick, were made to fit perfectly into cocktail mixer glasses (which is why they are called “shaker”) and are fairly tough to break. They are also horrible for craft beer.

Beer aroma is vital to beer enjoyment. Not only does the appealing aroma provide a cue to what we’re about to experience, but aroma can act as a catalyst to our tastebuds. A straight sided shaker pint allows the aroma to escape without any chance of cascading back onto itself.

Shaker glasses are intended to be a workhorse and a space saver—thus they are made to stack on top of themselves. How many times have you seen a barkeep stack shakers 5, 8 or 10 glasses or higher? How many times have you seen a bar keep twist or snap glasses apart because they’ve wedged so hard against each other? And each time they stack, bang or click, small imperfections are created inside the glass. Nothing that’s going to kill you, of course, but these imperfections create indentations and rough sections inside the glass that allows carbonation to be released. Carbonation should stay in your beer as long as possible—ideally being released just as it tumbles over the lip and into your mouth. Carbonation that is released too early means it’s not doing its job—helping to release aroma and flavor into your mouth.

Shaker glasses are also designed to be difficult to break. According to the class I took put on by Spiegalau, in order to last, the glass is thick and not made with the highest quality glass. What that means is that your beer won’t be at the proper temperature. Yes, glass is a good insulator, but thick glass isn’t able to change temperature quickly enough. here’s the scenario. Assume that your beer should be properly served around 38 degrees. If the glass has been sitting at room temperature for the (at least) two required minutes after being sanitized, the thick glass will actually increase the temperature of your beer instead of holding it steady.

So what’s the answer to this? The first thing is to purge all the shaker pints in your home and replace them with 3 or 4 high quality glassware. I really like the Spiegalau glassware that Dogfish Head and Sierra Nevada made famous, though there are “clones” made by other companies. And I’ve sat thru their class where I’ve compared the same beer side by side in a shaker and one of their glasses. The difference is significant. IPAs that in a shaker glass that I would think were a 40 IBU, seemed like a 60 or higher in the Spiegalau glass. Stout that had a hint of chocolate in a shaker were full of bakers chocolate in the Spiegalau. Beer that should be cold stayed that way in the expensive glassware.

But find an establishment that uses one of the better glasses and do a nose and a taste test for yourself. You’ll be amazed at the difference.

Hope this didn’t sound too much like a commercial. I received no compensation whatsoever.

Thanks to beerwrangler for the pix.