We’re a little bit behind in our blogging ventures, but not because we don’t love writing about this process – it’s just that we got a little bit of wind back in our sails, and we’ve (finally) been able to get sweaty and dirty again putting in our sweat equity.   So here’s all the fun stuff we forgot to write about as it happened: 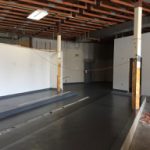 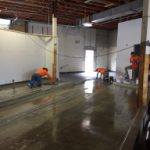 Isn’t it pretty?  And completely beer-proof.  It’s a Stonshield Textured Epoxy from Stonhard.   And once the brew house floor was down, that meant that… 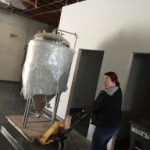 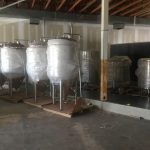 This was much easier said than done – we had to shuffle all the crates from the back of the brew house to temporarily sit in the front taproom area (until the floors were done), then we had to move them all back, uncrate each of those beauties, and get them lined up so that the fabulous crew from Anchor Moving & Storage could hoist them into place.  Those guys also made short work of getting the getting the glycol chiller out onto its new concrete pad. 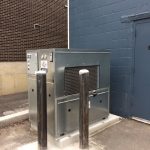 So after that exhausting week, it’s now unmistakably starting to look like a brewery in here. 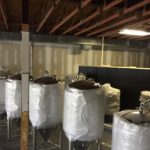 Oh, and last, but not least – we replaced the “for rent” signs out front with these beauties! 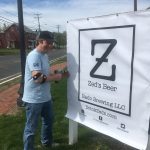 There is still a lot more to do before we can start to brew, but it feels like we’re moving forward again.  We know you are all hoping for an ETA (we are too!) but we have some more regulatory red tape before we will know when that can happen.  But we’re close to being able to announce an opening date sometime VERY soon.   Cheers!