start up brewery listen to your mother and clean up after you’re done!

Over the past months that I’ve been looking for a home for Zed’s Beer, I’ve probably seen somewhere around 50 properties, give or take.  They’ve been everything from old restaurants or pubs, to a speakeasy and old doctors offices.  I’ve seen brand spanking new warehouses so new you could eat off the floor.  And I’ve seen crawlspaces beneath a recently closed restaurant that was so dirty that I’m glad I never ate there.

But what I’m always so surprised by is what had been abandoned and left behind: somewhat valuable equipment that the previous tenant either didn’t want or left so quickly that they couldn’t take it.

There was an old yogurt shop that still had napkins on the table and m&m’s in the dispenser.  (yes, they were edible).

There was an old ice cream shop that still had gallons of soft serve mix in the disconnected fridge.  (no, I did not try it)

There were TVs still hanging from the wall of an abandoned coffee shop. (the plug cords were cut)

There was a water filter in a different coffee shop.  (yes, I told the landlord that I’d give them 50 bucks to get rid of it for him.  She wanted $150.)

A few weeks from now I’ll outline what my “favorite” place looked like after the owner just decided to lock the doors 4 years ago and get out of the business. 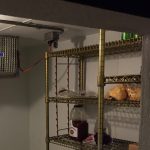 The picture you see is not of that place, but of another former restaurant that closed—about 3 months ago.  (Didn’t try the bbq sauce.)

Just about every bid offer I’ve put together includes language as to what I’d like to keep and what needs to be thrown away or removed.  For the record, I usually ask to keep all the bathroom fixtures, including toilets, sinks, fixtures and shelves.  No need to keep the wicker garbage cans or plastic plants, though.

I’ve asked to keep refrigerators and stainless sinks.  But no need to keep the deli meat slicer.

I’ve noted that I wanted the light fixtures, but that the drop ceilings should be removed, including all the water stained ones.  (Oh, and since they were water stained, I’d ask for a better guarantee that the roof doesn’t leak.)

It’s not really surprising that so much is abandoned.  All the stuff cost someone money, though if you’ve had to close up shop the last thing you care about is leaving the space as clean as possible.  And the property owners have no incentive to clean up the place either—they have no idea what the next tenant will want and why would they spend money on a property that isn’t making money?

Still, remember what your mother said: clean up after yourself.