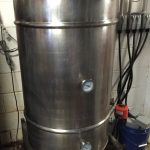 Got a little bit of frustrating news earlier in April that I’m doing my best to mitigate.

For background, Bado Brewing, LLC and Zed’s Beer will be a nano brewery producing approximately 300 barrels (300BBL) of beer a year.  I’ll be doing this through an electric 3BBL system: 4BBL Brew Kettle w/whirlpool, 3BBL Hot Liquor Tank and 3BBL Mash Tun and 6 jacketed 3BBL fermenters with immersible glycol chillers.  Go ahead and do a quick google search on beer and breweries to completely understand what that means, but suffice it to say that I believe this system allows for me to produce a wide variety of beer and sell about 60% or higher thru the tasting room.  The 3BBL system lets me brew batches that are big enough to not have to brew every day, but small enough that I can quickly respond to my customer’s needs.

And when I first started this new business, finding a system that fit my needs and was affordable enough to allow me to be profitable quickly enough was a top priority.  So much so that when I found a used system, I decided to buy it even before I had a space to put it in.  I simply changed the specs of the brewhouse and cellar when looking at properties.  The used system I purchased even fit my timing—it would be ready in mid-July and they even offered to store it for a few months should my licenses be delayed.

So it was a bit of a surprise when I heard from the brewery I was buying the system from that they weren’t able to sell it to me any longer!  Apparently, their plans for expanding hit a number of roadblocks with the township they were looking to expand into.  Roadblocks that put their expansion plans into jeopardy and would definitely delay their being able to give me their system in July.  If they gave me their system as planned, they wouldn’t have any equipment to brew on.

it was a difficult conversation for me to hear, but more difficult for them to have.  We had both relied on the deal happening—me for the brewing equipment and them for the money I was paying that would go a long way to buying their new equipment.

So now I’m back in the market for a brewhouse and cellar.  And I can say that I’m much more knowledgeable regarding what I’m looking for.  I understand my space’s restrictions now that I have one.  And I’m now building my system from the ground up, based on the system I was going to buy, but with small upgrades here and there.  For example, I’m going to purchase a 4BBL brew kettle instead of a 3BBL.  It’ll still fit, but it’ll give me more flexibility in the long run.  I’m also spending a little more on the heat exchanger.  Finally, every piece will have 1.5” ports for hoses, eliminating the need for adapters.  I’ll only have to buy one kind of replacement part.

It’ll cost a little more, but I think it’ll be worth it in the long run.