start up brewery–I’m a fan of bathrooms

I’m a fan of bathrooms.  I know that might sound controversial, but I don’t think that I’m going out on a limb by saying that a bathroom is the kind of feature that I’ve gotten used to finding in a building.  Scholars say that bathrooms in some form or another have been around since 3000BC.  Perhaps earlier.  They come in all kinds of shapes, colors and sizes, can be automatic or manual, wired or analog.  But all should, to one degree or another, provide the privacy necessary to provide each of us the opportunity to do what we need to do when we need to do it.

And since they are pretty much everywhere, I’m surprised at how neglected and damaged they can be.  Just look at some of the pictures of bathrooms that I’ve encountered while looking for a home for Zed’s Beer.  These were all fairly recent working facilities open to the public.  Now I get that no one is supposed to make money in the bathroom (and neither will YOU so don’t get any ideas!).  But the state of the second-most visited room says something about the place. 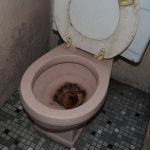 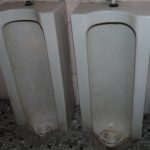 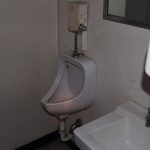 I can state unequivocally that Zed’s Beer will have a bathroom!  TWO, in fact.  I’ll let each user decide which one is for them, but between the two will be 4 sinks, 3 commodes and one urinal.  I’ve decided to not include a bidet, which was a decision I agonized over for hours and hope doesn’t come back to bite me on the ass.

The bathrooms will be ADA compliant, as evidenced by this picture.  Anyone in a wheelchair has enough room to do a complete 360 if they wish.  They can of a couple of spins, for all I care, though if I see them doing that I’ll wonder what they are up to and probably won’t serve them another beer.

There will also be doors that close, latches that work and a divider between the sink and urinal because that’s the right thing to do.

Oh yea—one last thing.  They will have paper towels because I like that better than the air dryers. 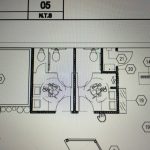 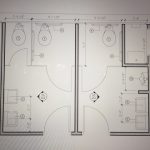