(Heads up that all e-mail subscribers will receive a second e-mail this week regarding Marlton Day and your first chance to buy some Zed’s Beer Swag!!!)

It seem like every single update we release could start with “so much has happened but we still don’t have an opening date” and this one is no exception!

So much has happened!  But we still don’t have an opening date.

Starting with the most important thing—we finally have full electricity at Zed’s!  After a 9 week waiting period, PSE&G was finally able to receive permission from Burlington County for temporary lane closures of Maple Ave.  They ran the 3 phase electric into the building on May 30th.  My apologies to anyone who was slightly delayed while they ran the wires.  It only took them 90 minutes from start to finish—seems like such a small amount of time when you realize we’ve been waiting for permission from the County for 9 weeks. 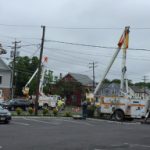 Moving on to other things:

We’ve installed the Zinc bartop and the beer taps! 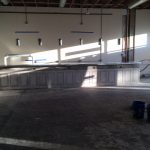 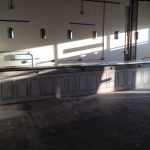 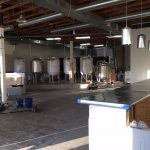 Matt and the guys from Absecon Island Beverage Company were fantastic!  I love the industrial looking feeder tube and can’t wait to unwrap the taps!  (Why we’re waiting below.)  Check out some of the pictures of me drilling two holes into my brand new zinc bartop—it was very nerve-wracking but came out fantastic. 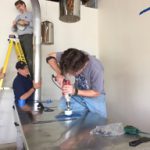 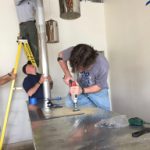 The bar itself is practically finished, with only the ADA section to go.

The front floor is also in!  Check out the time lapse video from the guys at MP Contract Flooring as they install the Expanko (Stonhard) floor.

Things you can’t see—all the electrical work that can be done has been done.  The cold box is finished and charged and the gas I’ll need has been ordered.  Electric is going to the HVAC in a couple of days to allow Steve Snow to condition the space.  George Coulter will be running the glycol lines for the fermenters this week, which is the next to last major piece of construction we’ve got left.

What’s the last piece?  Unfortunately, for 10 weeks the landlord has been waiting for the County to grant permission for another lane closure of Maple Ave.  This time to run a 2 inch water line into Zed’s.  The good thing is that the landlord received permission last week and we will be bringing water into the space on June 10!  The bad thing is that they will have to dig up concrete inside of Zed’s near the front corner to get the line inside and create more dust, etc.

(My apologies in advance for the road closure!)

And that’s why we don’t have an opening date.  We have to physically be able to brew to approach the state for permission and/or an inspection.  Once that permission is granted, we’ll be able to start brewing!!!